5 Questions to Ask Your Coach

One of the things all players need to do more is ask questions. I challenge every player I coach to ask questions during training sessions, before, during, or after games, and any other time they are not sure about anything. Unfortunately, we live in a culture where most people, including youth soccer players, do not like to appear like they do not have all the answers already. Especially when around their peers, kids are very hesitant to ask questions in fear of being judged by the other players, or even the coach. More often than not, players (all of us really) would rather pretend like we understand than ask a question to get help we need to perform at a higher level. Our fear of being seen as incompetent outweighs our desire to improve.

So during the season, I would challenge all players to ask questions of their coaches when anything is unclear or to get a deeper understanding of an aspect of the game they feel they already know. All of us, coaches, parents, and players, should always be seeking more information and knowledge to help us make good decisions and elevate our level of “play” on the field and off the field.

Here are 5 things a player should never hesitate to ask your coach:

1. What are my weakest areas as a player? Be ready for the answer to this question. Often people ask for feedback and they only want to hear good things. Too negative of a response and we do not take it well. As a player, one who wants to be great, you WANT to hear the negative. The positive does not help a player improve, but it makes them feel good and build confidence (so it is important to). When a coach is very honest with a player about what he needs to improve, it is the most valuable information the player receives. Listen intently, make sure you understand, and then go to work making it a strength.

2. What are your expectations of …. ? All coaches are different and no two have the same views about almost anything. Each will have a different opinion about how the game should be played, players should act, and what makes up a great player. Although I hope a coach would make this clear before the season, it does not always happen. There are a lot of assumptions. A coach assumes players know what he wants, and the players assume they understand what the coach expects. Often, both are wrong and it is a key reason for confusion and misunderstanding. Find out what your coach expects from you, and work hard at exceeding those expectations.

3. What is my role within the team? Coaches see every player in some type of role within the team. For the team to be successful, each player must play their role so the team can reach their goals. You hear coaches say, “Know your job.” On a soccer team, a forward, midfielder, defender, and goalkeeper can play very different roles and have very different “jobs.” Each coach will ask those players to play those positions very differently. Players will assume that playing forward for one coach is the same as playing for another coach. It is not. Within the system the team plays, your role can be very different. Make sure you know your role on the field (know your job) and execute!

4. What did YOU do as a player? Coaches need to know their players in order to coach them effectively. But, players should also know their coaches in order to play for them effectively. Understanding a coach’s background, playing experience, coaching experience, and how they played the game, often gives valuable insight to why and how the coach teaches the way he or she does. We are all influenced by our past and experiences, and a coach is no different. Coaches often reflect the way they were as a player in their approach to teaching the game. As you learn more about a coach’s playing past, habits, successes, and failures, it is easier to anticipate what the coach will do or say before the coach says it or does it.

5. Why? As a coach, I love this question from players. After explaining something during a training session or during a game, I appreciate when a player asks why. For me, this is a clear sign that either player wants to learn more about what I was talking about, or the player does not understand why I am asking them to play a certain why. Players often understand what I am asking them to do, but often do not know WHY they are doing it. As a coach, I try to explain the why, but I know not every player gets it or maybe even agrees with it. By asking why, a player can not just know what they are doing, but can understand why they are doing it and how it relates to the game. This is probably the most important part of the education piece of coaching. When players do something without understanding why, the slightest change in any aspect of the task will leave the players left unsure about what to do. When the WHY is clear, a player can make appropriate adjustments to any changes in the game or in a training activity. They can take the same principles of the WHY and apply it to any other situation to make a better decision.

Just ask questions….that is all I am saying. Too often, players are passive onlookers in their own development. Players should take control of their development, own their development, by asking important questions to coaches throughout the year. As a coach, I have learned a lot from my players asking questions about training activities and the way I ask them to play the game. In answering, I feel I helped them become a better player and student of the game, and it challenged me to fully understand my coaching approach and philosophy. 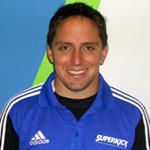 Director
Tony has a Masters in Education from The Ohio State University, is a State Certified teacher, and is a USSF C License coach. Tony was a standout player both academically and athletically at The Ohio State University, earning multiple honors both on the field and in the classroom. Tony's achievements included 2nd Team All Big Ten in 2001 and 2002, serving as Captain in 2002. Tony was named Most Inspirational Player in 2001 and 2002, as well as achieving Scholar Athlete status in those same years. Tony was a member of the 2002 MLS Draft Pool. After playing, Tony was a history teacher at Licking Valley High School in 2005 and at Dublin Scioto High School in 2006. In 2007, Tony Earp accepted a position at SuperKick as the Director of Soccer Training where he continues to serve as the Senior Director of Training managing programs, establishing training curriculums, and coaching athletes. Tony was the Head Coach for Hilliard Bradley High School boys soccer program in 2009 and 2010. In addition, Tony is a Director for Classics Eagles FC and is the Director of the SuperKick Classics Juniors Academy. With 10 years of coaching experience, Tony has developed a reputation of being a coach who motivates players to expect more from themselves and creates a training environment conducive to developing high level players.